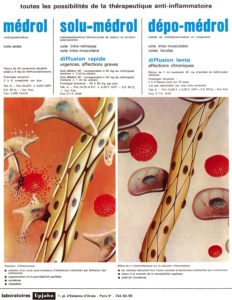 Methylprednisolone (MP) is a synthetic corticosteroid used for a long time to treat severe inflammation, autoimmune conditions, hypersensitivity reactions and organ rejection. Three different formulations were proposed initially to facilitate the use of the drug, orally or via intravenous (rapid diffusion) or intra-muscular (slow diffusion) injections. The clinical applications of the drug are extremely diversified, including intra-articular injections to reduce pain in knee osteoarthritis and injections of high doses MP as an attack therapy of inflammatory central nervous system disorders, such as acute spinal cord injury. Methylprednisolone can help significantly to decrease postoperative pain score, narcotic consumption and opioid-related adverse effects after specific surgeries.  Medrol ® drug is used in Human for about 50 years and remains extensively prescribed worldwide, with several million prescriptions per year.

In oncology, MP is regularly used to alleviate specific neurologic symptoms and deficits (such as autoimmune encephalitis) induced by certain anticancer drugs, notably by immuno-therapeutic agents. The systemic use of glucocorticoids like MP helps to reduce immune-related adverse drug reactions.

A “before & after” illustration of the effect of the three drug formulations on an inflamed vessel, with damaged cells and released cytotoxins (left). The drug treatment is aimed at stopping the inflammatory reaction, restoring the shape of the cells and their resistance to cytotoxins, and preserving the capillary permeability (right).