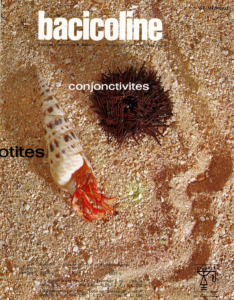 Bacicoline, as an application of ear drops (a combined preparation of chloramphenicol-colistin-hydrocortisone), was used to treat benign diffuse external otitis and conjunctivitis.

Colistin (also known as polymyxin E) is a broad-spectrum antibiotic, now considered to be an antimicrobial of last-resort for the treatment of multidrug-resistant Gram-negative bacterial infections, including pneumonia. The β-lactam antibiotic was isolated in 1949 in Japan, first approved in the US 1970, and used worldwide today, considered by WHO as an Essential Medicine. But the use of this lipopeptide antibiotic must be limited, due notably to its frequent treatment-limiting nephrotoxicity that occurs in roughly 30-60% of patients receiving a systemic polymyxin. Nevertheless, this old antibiotic is considered as one of the last therapeutic options for infections caused by ‘superbugs’ such as Pseudomonas aeruginosa, Acinetobacter baumannii, and Klebsiella pneumoniae.

The specific drug combination Bacicoline® is no longer used today, but the active ingredients remain utilized in different pharmaceutical products.

The illustration may represent the potential use of Bacicoline to treat bacterial conjunctivitis occurring after a sting with a sea urchin, or to treat otitis (the sort of Tibia mollusk may symbolize the blockade of the ear canal). Note also the face drawn on the sand, with the urchin (eye) and the mollusk (ear).