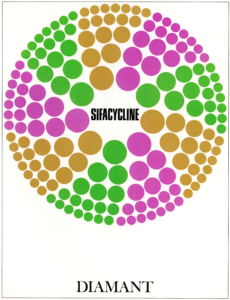 These two drugs contained the same active principle, the antibiotic tetracycline, one of the most classical, broad-spectrum anti-bacterial agent that inhibits protein synthesis in a large variety of microorganisms. 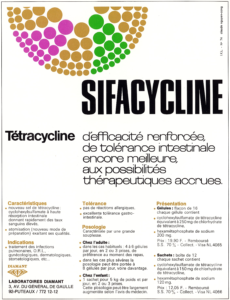 Tetracycline refers to a family of antibiotics discovered in the late 1940s. Eighty years later, they are still extensively used wordwide. A dozen of tetracyclines are marketed, including well-known products like doxycycline, minocycline and methacycline, to only cite a few. Tetracycline is one of the most prescribed first-generation products in the family, used essentially for oral treatments. The name tetracycline refers to the chemical structure characterized by a linear fused tetracyclic nucleus  to which functional groups are attached. To exert its activity, the drug must penetrate the bacteria and then it prevents the binding of the aminoacyl tRNA to the bacterial ribosome, to inhibit protein synthesis. The drug kills many bacteria but also certain parasites. The main issue is the development of drug resistance to tetracycline. 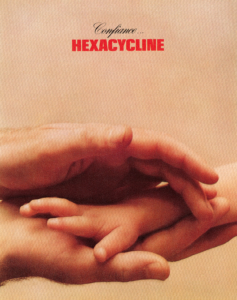 Hexacycline and Sifacycline were used essentially for respiratory tract infections, but also for other infectious pathologies in gynecology, dermatology, stomatology,…, as well as in veterinary medicine. 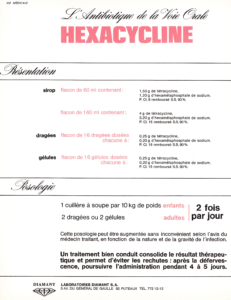 The communication around Sifacycline was focused on the efficacy and safety of the product, notably its improved gastrointestinal tolerance. The illustration probably reflected its capacity to combat a diversity of microorganisms (as circles of different colors). The illustration for Hexacycline was mainly based on the ease of use of the product and the confidence that it brings, in particular when it was used for children.